Just a few days ago, the OECD published the 2012 edition of its Economic Survey of the European Union. Overall interesting reading: though the European Commission was consulted and could comment on the draft version, this represents a welcome outside view of EU's current situation and challenges (as is known, Brussels has a tendency to be inward-looking and to see itself as the centre of the universe; thus, it is always good when different pertinent perspectives make their way).

One particular finding has drawn my attention, one that situates Romania as a striking outlier: emigration to the old EU members after accession. While there has been lots of converging evidence about the massive migration out of Romania in recent years - including the recent census in the country, and anecdotes about the massive presence of Romanians across Western Europe -, it is striking to see how it compares with other new members of the EU in this regard. 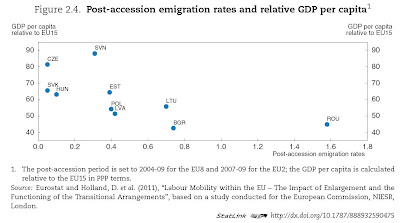 As per the chart above, the rate of emigration post-EU accession is more than double from Romania compared to any other country that joined the Union in 2004-2007. Compared to Poland, the other populous country among new EU members, Romania's emigration rate is four times higher, which considering that Romania's population if about half that of Poland, means that - notwithstanding the legend of the omnipresent Polish plumber - roughly twice as many Romanians as Poles have emigrated to Western Europe.