I vividly remember the time when I needed a visa to travel to Western Europe. The endless queues at foreign consulates, the constant humiliation of being treated like a second class European, the arrogance and corruption of some consulate staff, were all powerful deterrents to anyone traveling for a legitimate purpose.
Once, as a student, I almost missed a scholarship for a summer university in Southern France, due to the impossibility to get an Italian transit visa in time. As I was traveling by train, the excruciating routine of seeking transit visas from all countries on the way, in reverse order from the destination, got stuck for good at the Italian consulate in Bucharest. Such was the chaos and total disregard for visa applicants that I spent one week at the consulate's gates with hundreds others from about 6am to afternoon every day, without even getting to submit an application (for a less than 24 hour transit visa) or to show to anyone at the consulate the letter that I had from the French embassy, requesting that my transit visas be expedited. In fact, I never got to see the building from the inside. At the last minute, I decided to change route and got instead transit visas from Austria and Germany, traveling about 1,000 kilometers more to my final destination.

A few years ago, I was flying from Vienna to Sarajevo for a regional conference. At that time there weren't many direct flight connections between the ex-Yugoslav countries, and to travel between neighboring countries the easiest way was often to take a transfer flight through Vienna. Thus, on the same flight there were quite a few people from other Western Balkan countries, some of whom I knew, going to the same conference. The late evening flight took off on time, but shortly thereafter the pilot noticed some technical problems and decided to return to Vienna rather than continue to Sarajevo. All passengers were disembarked and booked for an early morning flight next day; we also got vouchers for dinner and accommodation at the NH hotel at Vienna airport, literally across the street from the terminal. Everything went smoothly, but as I was checking in at the hotel, I noticed that my Western Balkan acquaintances were missing; and they did not show up by the end of the dinner when I went to sleep.
I eventually found out next morning that they had spent much of the night in the airport, not having an Austrian visa to get out of the terminal and cross the street to the airport hotel; eventually they were given a visa after a few hours, which left them just enough time to check in at the hotel, take a shower and return to the terminal for the morning flight.

Earlier this year, as I was flying from Vienna to Oslo on a snowy winter evening, a surprise was awaiting upon disembarkment at Oslo airport: a gentleman in uniform, standing at the gate (just standing there, not at the typical booth as there was none around) was checking travelers' passports or IDs.
To remind, both Austria and Norway are part of the border-free Schengen zone (though the latter is not an EU member); theoretically this means that there should be no control whatsoever at the border. But there it was.
To be fair, it went pretty fast, the uniformed man seemed to be doing a largely perfunctory check. Notwithstanding, my Romanian passport earned me some bonus conversation. Unlike the others, I was asked about the purpose and duration of my visit, and when I explained, it probably seemed somehow counter-intuitive to my interlocutor, so he asked me to show him some evidence, which I did. While doing this, all along in the back of my mind a nagging inner voice was telling me that I didn't have to answer those questions - as an EU national I was free to travel within the Schengen zone at will without having to provide any explanation. But I just answered them, because it seemed more expedient and I was not in the mood to look for trouble.
To give some minimum satisfaction to the nagging voice, and having already established rock-solid credentials for my less than 24-hour visit to Norway, I asked the uniformed man what was his purpose checking passports at a Schengen internal (non-)border. He seemed a little surprised by the question and told me that his was not a border control, just a police check. It just happened at the border by some coincidence.

Why am I telling these stories?
Well, because these personal stories (and I actually have many, many more) are illustrative of the history that we have been living in this region. The experience of traveling in Europe, as a Romanian, has changed a lot, mostly for the better, in the last 20 years - and this has coincided with historic progress in the country's European integration, culminating with accession to the EU in 2007 (perhaps more important for the common folks was the lifting of visa requirements back in 2002).
And this has pretty much been the trend as well for other Eastern European countries that gravitate towards the EU.

But this trend seems now to have stalled, or even gone into reverse gear. 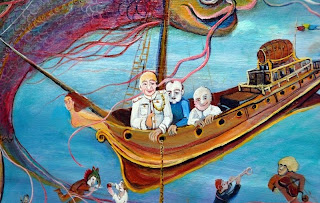 Notwithstanding the attempts (sometimes rather pathetic, like this one) to make sense of the momentous developments in the Arab world, the events there (as I argued before) remain largely incomprehensible for many Westerners.

Among others, it is mind-boggling how the protests can continue for weeks in places like Syria or Yemen, in the face of atrocious repression by desperate governments clinging to power.

I would argue that any serious effort to understand what motivates such resilience of protests should look at the cultural and especially religious background of the Arab societies, which makes so many of their youth ready for martyrdom to a degree nowhere to be seen in our time anywhere in the (post-)Christian West. The Tunisian revolt was actually sparked by such a self-inflicted act of martyrdom.

Once the barrier of fear has been broken, the fact - reinforced with fresh examples on a weekly basis - is that Muslim youth in Arab countries are far more willing to sacrifice their lives for a cause, and this willingness is nurtured and sustained in time for a lot longer than one can even imagine nowadays in Western societies. And religion plays a huge role in this: Arab revolts are re-ignited every Friday by the prayer in mosques, they follow a ritualistic pattern as much as a political one.