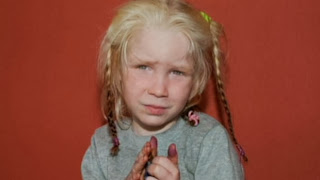 They may still be retained on other charges, like social assistance fraud (they declared more children to get undue state allocations) or some other (Bulgarian and Greek authorities seem intent on proving some illegality like child-selling, notwithstanding what the concerned Roma families say). Greece has an inefficient administration and a pervasive, long-standing problem with tax evasion and social assistance fraud, why not start serious enforcement with this Roma case? The girl is now in state care and might not be returned to her adoptive family.

But something will definitely change: I bet she will no longer be called "the blond angel".
She may be blonde, but she is a Roma after all - so no "angel".
Posted by Rational Idealist at 11:29 AM