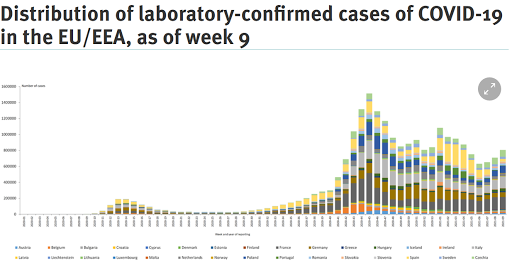 As an example, see below the corresponding charts for Israel. It shows that the number of new cases in the latest wave of the pandemic peaked in Israel around 17 January, and on that date the country had a vaccination rate of 29.62. 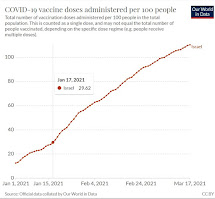 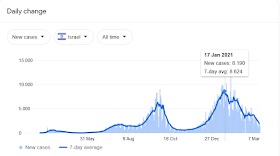 Using a similar approach, we will see, for instance, that:
While the above examples - and the list could continue... - don't show any consistent pattern and while a number of factors (such as the different types of vaccines used) are not accounted for, one conclusion still emerges quite clearly in my view: that the rate of vaccination is not the determining factor in mitigating the current wave of the pandemic.
Some countries have managed to slow the infection rates with very little vaccines, by applying measures already used before the vaccines were even available, such as lockdowns (clearly the case in the UK). Others haven't been able to flatten the curve even with a sizeable part of their population vaccinated.
There are several implications for the coming period.
First, that whatever we do on vaccines will not bring relief in the short run - at least not in Europe with its current vaccination rates. It will take months for vaccination to reach a level where it can have a meaningful impact on the pandemic. Meanwhile, we are dealing with a surging third wave and it will be unavoidable to see more sickness and death, as well as more lockdowns in the coming period.
Second, that a vaccine-driven re-opening is not for tomorrow. The European Commission's aim to introduce 'Digital Green Certificates' by this summer should not be seen for more than it is: a limited fix to get around the more stringent travel restrictions currently in place (such as mandatory quarantines) and restore a semblance of free movement, the most cherished right by Europeans. Holding that green certificate will not mean total freedom, nor getting 'back to normal', nor forgetting about covid.
Third, and this is a more optimistic conclusion, that vaccines will still help us. With the warmer weather kicking in and people being able to spend more time outdoors, we are likely to benefit from a relative respite from the virus in the Northern Hemisphere over the summer months, as was also the case last year. But this time we will be able to use this period for reaching, before autumn, vaccination rates that are likely to make a real difference. So there are good chances for this third wave to be the last of this magnitude, of this gravity - the next one should catch many of us vaccinated and should therefore be significantly milder. There is light at the end of the tunnel, it's just that the tunnel is somewhat longer than many were hoping.
Not least, against this background it becomes clear that the vaccine rivalries among Western nations are not about the real problem at hand, but more of a distraction, you may even call it silly politics. Whether and how fast the EU catches up with Britain or  the US on vaccination is largely irrelevant for this virus. All of them (UK, US, EU) will have gone through the third wave of the pandemic with significant human and economic costs that the vaccines couldn't save.
But still, it's far from trivial. As I argued back in January:

The coming wave will be the deadliest so far in Europe, with or without the vaccine.
But this happening against the background of a bungled vaccine roll-out due to supply shortages, while across the Channel the UK is emerging from the third wave and immunizes its citizens at a much faster clip, will be politically explosive. A full vindication of Brexit would be the cherry on the pie. The collapse of the EU itself cannot be ruled out. The joint action on vaccines by the 27 member states, hailed as a big triumph for European solidarity only one month ago, could become its undoing in the coming few weeks.
Hence, for the EU getting its vaccine roll-out back on track as fast as possible is an existential stake.

And this will explain a lot of what you'll be seeing in the news these days.
Posted by Rational Idealist at 3:12 PM