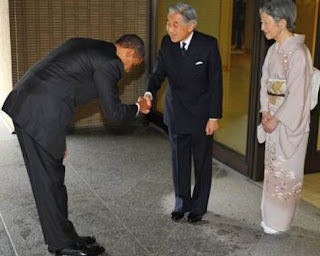 He did it again!
Why is Obama bowing to foreign monarchs? What message does this send? And why some in the US have a problem with this?

Critics say that by bowing the president forfeits American dignity and sends a message of weakness. Dick Cheney, who in 2007 shook the Emperor's hand without bowing, said that "There is no reason for an American president to bow to anyone. Our friends and allies don't expect it, and our enemies see it as a sign of weakness".

Supporters see the bows - or at least the latest one - as an expression of politeness and cultural sensitivity.

Interestingly enough, a large majority of Americans is not riled by Obama's bowing - in fact, a full two thirds (67%) approve, including a majority of Republicans (53%). And this nowhere else than in a Fox News Poll.

I'm pretty cool about the bows.

I think Obama keeps signaling to the world that he is ready to engage on the other party's terms - which is a radical contrast to the foreign policy tone of the previous administration. It's not just about the bows, but plenty of other things - such as his statements on the repression of the green revolution in Iran (too soft for the neocons' taste, but actually well appreciated by the Iranian opposition), his famous Cairo speech to the Muslim world, or his attempt to engage China as an equal partner.
The implicit message is - I am (America is) making an effort to understand your reference framework, to communicate with you in your "language". It's fundamentally about opening a genuine communication channel, it's about also listening. This is a big premiere when it comes to the US, and it takes some time for the news to sink in. But this approach may in the medium term expand to potentially unprecedented levels the outreach of whatever Obama has to say to the world. He is basically opening a communication channel that goes over and under the political leaders that he deals with, and reaches straight to their peoples.
In fact, his bows - sometimes physical, sometimes rhetoric - are fundamentally subversive.

The softness of the tone, the new flexibility of the US on the communication code with the rest of the world, don't need to also apply to the content that is being conveyed. Actually, some of the content that Obama is communicating is - potentially - more radically transformative than anything coming out of the US since Ronald Reagan.
And my guess is that as the outreach of his message grows, as he grows himself confident with this type of communication, he may have a unique chance to re-shape the world.
Posted by Rational Idealist at 10:41 PM