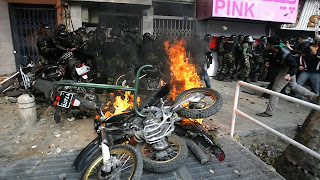 The events unfolding today in Iran (see for instance liveblogging here and here), remind me a lot about Romania exactly 20 years ago, as it toppled its communist dictatorship in a bloody uprising. Like then, the world is watching in awe as history is being made.

Last week I predicted that people's emotional response to the death of Grand Ayatollah Montazeri may be the tipping point of the green revolution. It now seems all but certain that this has been indeed the case.

It is not the first time when the people of Iran show heroic courage in face of brutal repression, and the last six months have been a continuous demonstration of their unbreakable resistance.
Among all the death and destruction of today, however, one rather new factor is emerging. As the movement's base dramatically expanded - in the wake of Montazeri's death - across the country and across social groups, and as the regime almost completely abandoned its attempt to dissimulate its nakedly fascist character under the cover of religion, for the first time there are numerous and consistent reports, supported by ample video and photographic images (like the one above), of the people successfully taking on the security forces. I cannot overemphasize the significance of this development and how it alters the entire dynamics of the situation.

Iran is mourning its martyrs. But amid the chaotic scenes in Tehran and many other cities today, this much has become crystal clear: from now on, the Khamenei-Ahmadinejad regime lives on borrowed time.


UPDATE: This comment just in from Andrew Sullivan, which pretty much coincides with my own assessment of the situation:

This has to be seen now as a crippling blow to the coup regime. This vivid demonstration that they simply cannot command the assent of the Iranian people except by brutal, raw, thuggish violence, and that resistance to the regime is clearly stronger, more impassioned and angrier than ever before is their death knell. They have lost any shred of legitimacy - and the Green Revolution is outlasting them in conviction and energy and might.

The significance of this day, Ashura, the day Khomeini regarded as the turning point against the Shah, cannot be under-estimated. Its symbolic power in Shia Islam, its themes of resistance to tyranny to the last drop of blood, its fusion of religious mourning and political revolt: this makes it lethal to the fascist thugs who dropped any pretense of ruling by even tacit consent last June.

We cannot know yet, but this might be it: the pivot on which our collective future hangs.

Posted by Rational Idealist at 5:34 PM