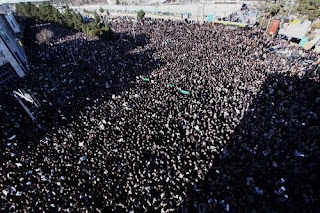 Crowd emotions sometimes have a strange alchemy.
In a political resistance movement, the death of a leader can at times spell the slow extinction of the activist energy of his followers, allowing the establishment to regain its footing and re-establish control.
But more often, it only serves to give fresh, decisive momentum to a mass dynamics that can thereafter overcome any obstacle.

The passing away last Saturday of Grand Ayatollah Montazeri (1922-2009) in Iran appears to be of the second category.

A leading figure of the shia Islam, his religious authority easily rivals - and is probably greater than - that of Iran's Supreme Leader Ayatollah Khamenei. Groomed in the 1980s to be Khomeini's successor at the head of the Islamic Republic, he instead raised against the crimes of a regime that he had helped establish, and suffered persecution and marginalization for it. A man of integrity and indomitable courage, after the rigged elections of last June he has been a powerful, unrelenting voice for the resistance in the face of an increasingly brutal regime. He went as far as issuing a fatwa declaring Supreme Leader Khamenei illegitimate due to his acts against the people. A honest, permanently self-questioning character, he publicly regretted towards the end of his life his role in some of the early events of the Islamic revolution.

With Iranians' long established habit of turning mournings into political protest, one can expect more unrest in the coming period. And it has already started.
But this mourning is different from others, and the impact of Montazeri's death is more profound.

He was not an activist leader of the green movement, but a respected, inspiring spiritual figure. Thus, the impact of his death should be understood at a spiritual level.

As long as he was alive, though very slim, the remote possibility existed in theory that the regime could bring him back in line. Or that he would make a mistake and discredit himself. Now, his passing away on a note of resistance that was firm and uncompromising until the end deals a definitive crack to the pretense of religious legitimacy of the islamo-fascist Khamenei-Ahmadinejad regime, which had already lost any trace of democratic legitimacy after its murderous crackdown against the green movement.

In an older post (in Romanian) I argued that by denying Mousavi's election victory, the regime had basically cut off all bridges with Iran's hugely numerous, educated, activist young generation, and by this condemned itself to extinction in the coming years. The generation that took to the streets in the green movement had offered a last hand to the system through its massive, enthusiastic participation in the elections. The failure to integrate them is the final death warrant of the Islamic Republic. These youngsters will certainly live in a different country as adults.

Montazeri's passing away drives the last nail in the regime's coffin. Its religious basis becomes now just as shaky as its political and demographic ones.

Maybe not the best comparison, but I cannot help remembering in this context the passing away of a historic anti-communist leader in Romania, Corneliu Coposu. It happened in November 1995, in a country nominally free, in fact still ruled by former communists and Securitate agents under a pretense of democracy. Below is a pic from his public funerals, in central Bucharest.
While alive, he was a constant target for smearing by the regime propaganda through part of the state media. His opposition party had a very committed, but limited following.
When he died, the wave of popular emotion was such that even the regime leaders felt obliged to pay their respects. Somehow many people who used to hate him (under influence of the official propaganda) suffered a miraculous catharsis in a matter of days. And at elections a year later, the people voted in a landslide for the opposition, triggering the first genuine regime change in post-communist Romania. 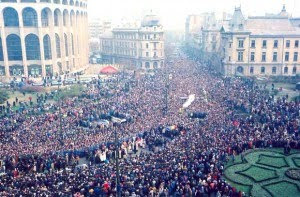 Posted by Rational Idealist at 1:02 AM