How we understand history (EN)

The dramatic events in the Arab world over the past couple of months have captured the attention and imagination of mankind. But how do we understand the tectonic changes that are unfolding?

Reality is not easy to put into logical categories; it is often chaotic and incomprehensible, even more so in situations of conflict and social upheaval.
However, trying to understand what is going on by forming a narrative of the events is a very powerful human instinct: we simply are designed to function by making sense of reality, by projecting some sort of pre-formed mental coherence - usually in the form of a comforting narrative - on our environment and circumstances.
And sometimes the urge to take action may be just a symptom of mental insecurity due to lack of understanding, to a failure to make credible sense of reality. Thus, action becomes an effort to regulate reality by making it fit into an acceptable narrative.

From this viewpoint, the international military intervention in Lybia pushed for by France and Britain (with the US following with some reluctance) could also be read as a symptom of mental insecurity.

The writing on the wall, since the beginning of the Arab turmoil, has been the declining influence of the West, even in a strategically crucial region in its very backyard. Remember how the regional tsunami of social protests took the West by surprise, found it unprepared and eventually forced it to go along a change that it didn't expect, didn't want, and didn't quite understand (the ideas of freedom and people power that eventually gained prevalence on the positive side are just nuggets of understanding to offer some familiar, though precarious anchor to Western opinion in an ocean of unpredictability and incomprehensibility; same with fear of islamism on the negative side).
The decline of the West's global influence and the emergence of Asia is a long-term established trend, and the understanding of this trend has more recently started to sink in even in America and Europe (particularly after the financial crisis originated in the very center of the Western economic order); but the West's influence in the resource-rich North Africa and Middle East seemed well assured through a thick web of economic, political, historic and military links. By throwing this old certainty into question, the improbable awakening of the Arab street has in fact created much insecurity in the West.
And such insecurity calls for action. Decisive action.


This process of inadequacy to reality, incomprehension that leads to insecurity that leads to action is the most visible in the case of France: first, it didn't acknowledge the Arab upheaval; then, it put itself on the wrong side of history by offering support to the dictators in repressing the popular revolts; and now it champions intervention in the much more complicated context of Lybia, in an ongoing civil war between a bloody, mad military dictator and an armed insurgency (of which we know almost nothing).

But, I am afraid for the French, the story of Arab revolutions is only getting more complicated, not simpler. Our mental capacities - and those of our leaders - will be put at tougher tests in the coming period. 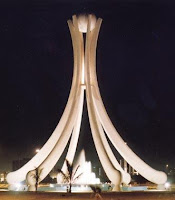 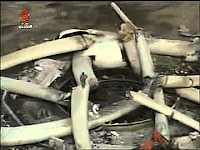 As the Western powers intervene to support the Lybian insurection, a different narrative is trying to take hold in the tiny Western allied country of Bahrain, where the political leadership, officially propped by a foreign army (Saudi Arabia) succumbed to the folly of murderous repression. The perfect symbol for this Bahreini narrative is the government's demolition of that emblematic rallying point of the pro-democracy protesters, the Pearl roundabout monument.
The West absolutely needs to keep itself very busy in Lybia, or else may be obliged to observe (and invent an acceptable narrative for) what's going on in Bahrein, home of US 5th Fleet.
Posted by Rational Idealist at 1:33 AM