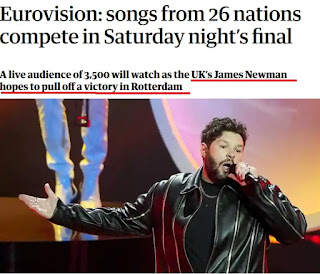 So the competitor from the UK was hoping to win... and he came out last with nil (zero!) points.
It's not easy at all to score a clean zero points in an Eurovision contest. Still, the UK has managed this feat twice, and it's the fifth time it has come last.
Sure, you can consider Eurovision - as I do - a largely pointless jamboree with little relation to the quality of the music. Still, as the ranking of each competitor is determined in good part based on voting by the public from the other countries, such extreme results are not irrelevant. And the point I'm making here is not about Eurovision, but about the UK.
I have often admired and envied the capacity of some peoples / countries to think very high of themselves. It's usually helpful and can be put to very positive uses. The 'can do' / 'nothing is impossible' / 'we are the best' attitude has helped achieve great things in history. Lack of self-confidence and assertiveness, on the other hand, is persistently plaguing some countries' capacity to reach their potential.

But, occasionally, the gap between the self-perception and how others see you grows so wide that cheerful self-confidence turns into delusion and a reckoning becomes unavoidable.

One can wonder whether this Eurovision example isn't a metaphor for other consequential events in recent British history.

Posted by Rational Idealist at 10:17 AM