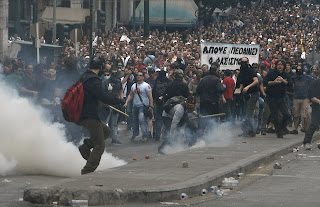 As I was incredulously watching the scenes of urban chaos yesterday in Athens, a Greek friend was live chatting: "it's like Bishkek". Indeed, the type of challenge increasingly faced by some Western countries (now Greece; earlier Iceland; soon maybe Spain, Portugal, Italy and the UK) at times - but not always - appears to unveil a kind of political and institutional fragility that makes them more vulnerable than commonly assumed - and perhaps as vulnerable as much less settled places. Which means that the challenge is probably of a different nature altogether than those faced during the normal transition/convergence processes that had been the dominant governance paradigm until the crisis hit.

The basic social contract that underpins representative democracy is now directly questioned in some countries, in relation to the poor state performance - in policy, institutional arrangements, integrity - and poor outcomes of state action. The legitimacy of financial policy decisions being made - in a traditionally non-transparent way - is directly contested. The typical IMF fix suddenly looks not so easily feasible.

A new social contract and a renewed politics (as well as new political elites) may be the silver lining of this crisis, if radical enough changes can be managed within the system; but a more somber scenario - of state failure in the heart of Europe - is also imaginable in the contrary case. The resilience of political frameworks is being put at test. In Greece, the popular perception of generalized political corruption with impunity is what fuels the revolt at least as much as economic hardship; people are just not willing to accept more sacrifices unless they see some politicians pay for the mess that they helped create.

We may be witnessing the beginning of a series of events that could durably affect governance patterns.

Incidentally, this reminds me of the - by now famous - "shitty deal" scene at the Goldman Sachs hearings last week:

Trying to get rid of a bad asset by selling it to unknowing customers used to be considered legit business practice in the financial industry - surely not nice, but nothing special after all.
And the same used to be the case for bad policy - no politician was ever prosecuted just for generating bad policies, the only conceivable liability being the political one - not be reelected.
It looks like the liability standards might be about to change, with potentially big consequences on the nature of politics.
Posted by Rational Idealist at 12:34 AM