Speeding to the Edge (EN) 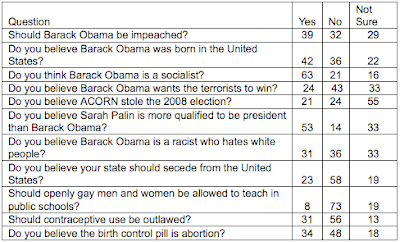 The data in the table above comes from a recent opinion poll among self-identified Republicans in the US.

Some time ago I wrote:

At some point over the past decade, the New Barbarians took over the GOP and turned it into an ecosystem that breeds ideologically brainwashed, bullying mutants and takes out the oxygen of those with a rational, critical mind.
We are starting to see those mutant life forms multiplying in the ecosystem of the Republican Party and gradually submerging the GOP through the power of their sheer number.


Click here for the full data of the poll, as it has some other interesting items - for instance, Palin and Cheney come respectively number one (by far) and number three (very close to second) in the respondents' preferences for the Republican presidential candidate in 2012. And if you have time take a look at Nate Silver's cogent analysis of what may be the implications for GOP's electoral politics of the unusually uniform views among the Republican base.

But here is my point: the GOP is getting caught into a chain of events that spells its doom.

Irrespective of how good their poll numbers for the November mid-term elections might look right now, the party is locking itself from the inside in a train that speeds toward the edge of the cliff. And is about to throw the key through the window.

Here is how I think it works:
In the context of a radicalized Republican base and of faltering support for Obama and the Democrats among independent voters, the GOP's increasingly irrational obstructionism in Congress may seem a good strategy heading to November. But in doing that, the GOP gives away the middle ground and puts in motion a vicious circle of increased radicalization, in which the key to success within the party is gradually reduced to adherence to ideological dogma and rejection of bipartisan political compromise.

I am with Andrew Sullivan on this:
What you begin to realize is that on a whole host of issues, the GOP is going backward in areas of social tolerance, as they marinate in their own paranoia and purge every non-ideologue from their ranks. And as they go backward and feel, yes, left behind, their virulence and resentment intensify. It's a classic fundamentalist response to modernity. (...) The hatred of Obama - a clearly decent and obviously Christian man - is not about him. It's about them. (...) I mean: look at Palin's family and Obama's. Whose is the more traditional? And yet Palin is allegedly the avatar of family values - and Obama is a commie subversive.

This process has been going on for years - though as a party in power there were some inherent limits to extreme rhetoric and radical ideology, which the GOP is no longer constrained by as an opposition party. McCain's forced transformation from a maverick into a ruthless dogmatic during the 2008 campaign, his choice of Palin as running mate to make up with the party base, Obama's and the Democrats' landslide victory in those elections are all symptoms of GOP's ideological implosion. The continued apology for torture and the state of denial with regard to the former Administration's responsibility for the economic crisis, its role in the financial bailout, its failings on national security (to surrealist extremes such as Rudy Giuliani - of all people - seemingly forgetting that 9/11 happened on Bush's watch) - illustrate the same drifting of the GOP away from the real world and into an autistic bubble.
Their temporary electoral revival these days is due to a number of factors, such as people going naturally through a painful adjustment of their immense (and frankly impossible) expectations from Obama in line with what can reasonably be achieved, and the new Administration paying a political cost as it is cleaning some of the mess that it inherited from the previous one.
But of course Republicans misinterpret their current favorable poll numbers as a durable vindication of their ideological radicalization.

I think they are in for a big surprise. Maybe even in November. And surely by 2012 if they don't change course - and they are making it increasingly hard to even think about changing course.

They have been given a chance though: a powerful wake up call from none other than Obama himself, when he spoke at the House Republicans retreat in Baltimore last Friday.

Below is the part when Obama takes questions for Republican congressmen and congresswomen. It runs for a little more than an hour and is really worth watching throughout (bear with the sound problems during the first two minutes, the patience will be rewarded!).

It's not just that a policy dialogue of such density between power and opposition is probably unprecedented - which makes it a must watch for anyone with an interest in American politics and in seeing democracy at work.
It's not just that Obama was literally majestic on the policy substance - and remember, this is the guy who was framed during the campaign as just nice talk with no substance.

More important for the GOP is the implicit message that he gave them:
If you don't change course, don't think you stand a chance to win. I will defeat you. I can counter your game - and here's how I can do it.

Posted by Rational Idealist at 4:07 PM